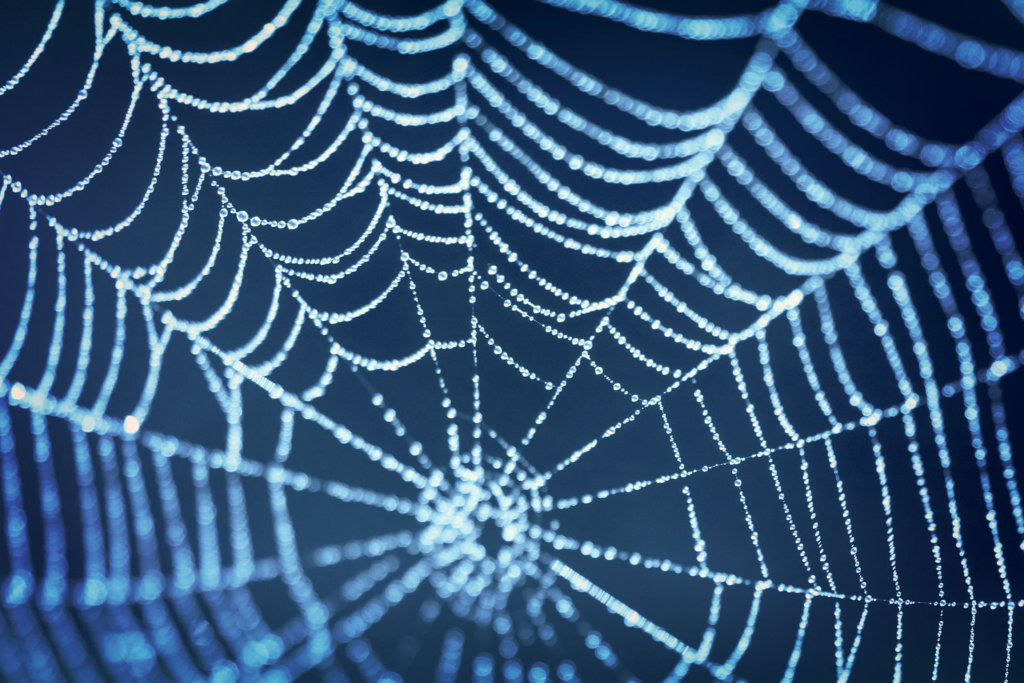 Large or small, spiders can give anyone a fright!

Unfortunately, the UK is no stranger to biting spiders, with over 650 species inhabiting the land. The real question is, should you be afraid when spiders enter your home?

Here’s our guide to 10 of the creepiest house spiders in the UK. We’ll show you how to identify them and whether or not their bite is dangerous.

We also have some tips on removing them from your home safely, so you won’t have to live with these creepy, eight-legged creatures!

The Tube Web Spider, also known as the cellar spider, has a large body and intimidating appearance. Growing up to 23mm in length, this spider is black with six eyes and shiny green fangs.

The spider creates a tube-shaped web inside cracks or small spaces behind furniture. Silk threads extend from the tube that will vibrate when an insect comes in contact, which triggers the spider to shoot from the tunnel and grab the prey with its fangs.

The Tube Web Spider is a matriphagy species, which means after the offspring hatch, they consume the mother.

Where it likes to lurk: You can find the spider under or behind furniture, inside stacks of logs, and in cracks or holes in the walls.

Bite and Side Effects: The bite of this spider can be very painful, much akin to being stung by a bee. The redness, swelling, and pain taper off after several days, with no lasting side effects.

The Giant House Spider has a body around 15mm, but when you add in the length of its hairy legs, it can reach up to 75mm in size. The spider is usually a dark brown, tan, or orange with mottled shades of gray or beige.

The spider builds a net-like web with a funnel at one corner, where it lies in wait for prey. Most females sit on the web continually, while males tend to wander about looking for a mate.

Where it likes to lurk: The spider hangs out in corners near ceilings, in walls, attics, garages, or boxes.

Bite and Side Effects: The spider will bite humans in self-defense. Unless a person suffers from specific allergies, the bite will only produce localized redness or swelling for a short span.

The Cardinal Spider can be huge, growing up to 14cm in length. The spider is known as the largest in the UK. Young spiders tend to be paler than their adult counterpart, which has a deep red-brown color.

The spider likes to hunt at night and is extremely fast. It can survive for several months with no food and spins a sheet web with a center funnel.

Where it likes to lurk: The spider hides inside closets, attics, or walls. Often found in the bathtub as their hairy legs make it hard to escape.

Bite and Side Effects: Bites are rare and should cause no pain.

The Zebra Jumping Spider is creepy due to its ability to jump as far as 10cm quickly. The spider grows up to 8mm long and has a distinct black and white coloration.

What sets this spider apart is that they do not make a web and actively hunt for a meal. The spider has large, front-facing eyes that help it spot prey.

Where it likes to lurk: The spider prefers windows, doors, and walls, where they can actively hunt for food.

Bite and Side Effects: The spider will bite to defend themselves, which is rare. Symptoms include slight swelling, pain, or itching around the bite location.

The Lace Web Spider averages 5mm to 15mm in length and is brown with distinctive yellow markings on the abdomen.

The webbing has a woolly appearance since many of the fine silks stick together. The circular shape with a center tunnel is another identifier.

Where it likes to lurk: These spiders like to hang out on walls and ceilings. Most only come into homes to avoid excessive rain that floods their habitat, or in the fall as they hunt for a mate.

Bite and Side Effects: The spider does bite, and it can be painful, but short-lived. Swelling and pain usually disappear within 12 hours.

Growing up to 20mm in length, the False Widow Spider is one of Britain’s more venomous arachnids. The balloon-like abdomen and dark brown coloring are two telltale identifiers.

The web appears loosely woven and is often near a crevice where the spider hides in the daytime.

Where it likes to lurk: Porches, window frames, around cupboards and appliances, conservatories, and lofts are favorite hiding spots.

Bite and Side Effects: The spider rarely bites, but it can be harmful. Symptoms include numbness or burning at the bite location up to extreme swelling and pain. Persons with extra sensitivity may also experience chest pain.

The Cupboard Spider can grow up to 12mm and is so prolific at laying eggs (up to 300 a year) it’s no wonder they are so prevalent inside homes.

The spider has a bulbous abdomen and has colors from brown or black to a dark purple. Young spiders may have markings on the back, while mature spiders have a solid color.

Where it likes to lurk: As their name suggests, the spider prefers to hide inside cupboards, drawers, or cubbyholes.

Bite and Side Effects: This non-aggressive spider rarely bites, but when it does, expect a few days of possible blistering at the bite, slight pain, sweats, fever, or fatigue.

The Money Spider grows to a mere 5mm in length. The body is typically black or gray, but some can be mottled or have spots.

The telltale web of a Money spider is the horizontal net or sheetlike appearance with tiny offshoot lines that encourage insects to travel into the main web where the spider awaits.

Where it likes to lurk: Look for the spider around your fireplace wood bin or hanging out near indoor plants.

Bite and Side Effects: The fangs are too short to penetrate human skin and cause harm, but they do bite. The best side effect is the Money Spider’s claim to fame that finding one in your hair brings good fortune!

The Missing Sector Orb spider can reach 7mm in size and has a grey abdomen with a brown pattern on the back resembling an oak leaf.

The spider gets its name from the shape of the web it spins, with a bare section in the upper portion that is missing crosslink silk. Behind this missing section will be a single line leading to a tubular hideout where the spider waits for prey.

Where it likes to lurk: The spider prefers window frames and sills, and cracks behind tall furniture or headboards and the wall.

Bite and Side Effects: The spider doesn’t bite, so there is no concern of side effects.

Daddy Long Legs have a small head and oval body but get their name from their overly longs legs. Because of this feature, they can grow up to 45mm.

The webs appear open and loose. The spider will shake if you get too close, which is a form of protection against predators.

Where it likes to lurk: The spider prefers to live in rafters or corners anywhere in the home.

Bite and Side Effects: The fangs of a Daddy Long Leg are short, and humans lack reports of actual bites. There is an urban myth that the spider is venomous, but new studies show this to be false.

How to Get Rid of Spiders Humanely

Spiders play an essential role in the earth’s ecosystem. While it’s creepy to encounter them inside your home, there are several ways to deal with them without the need to kill.

Next up are humane ways to remove spiders from your home as well as tips on how to make your house less inviting to these eight-legged friends.

Technique: Take a clear jar or plastic container and quickly cover and trap the spider against the wall, floor, or ceiling.

Slide a thin sheet of paperboard between the surface and the container, coaxing the spider into the jar. Hold the jar and paperboard together, carry the jar outside, and release the spider.

Technique: For hard-to-reach spiders hiding in corners or cracks, pull out the vacuum. To avoid killing the spiders or damaging egg casings from dust and debris, put in a clean filter bag.

Suck up the spider and web, quickly remove the filter bag, and place it outside until the spider has time to crawl out.

To stop inviting creepy-crawlies to enter your home, consider screen installation, or fix rips. Fill open areas around pipes or wires that lead into your home with expandable foam.

When you can’t change lighting location, swap out a traditional incandescent bulb that emits bluish light, to a yellow LED bulb that studies show to be unappealing to insects.

Scroll back to top Hausette