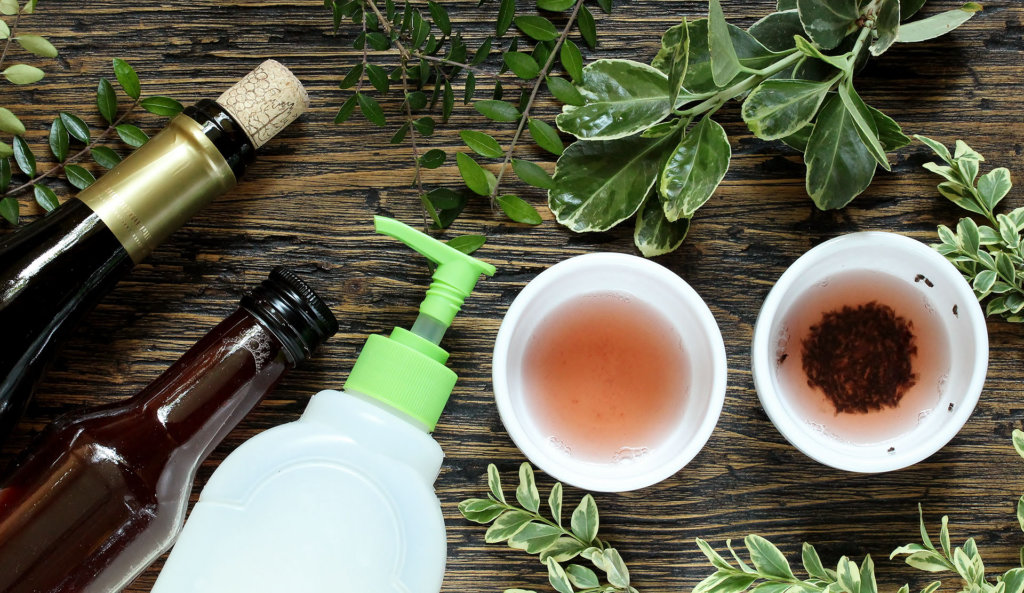 Gnats tend to appear when you forget to wipe down food spills, clean out sink drains, or take out the trash. Once they show up, they are often a pain to get rid of.

Some home remedies only seem to make more of a problem, leaving your counters covered in a sticky mess. The best solutions involve setting gnat traps and using the right combination of ingredients to kill the pests on contact.

Try any of the following ten super-effective methods if you want to get rid of gnats and other insects quickly.

Contents hide
Method 1: Make a Gnat Trap Using Apple Cider Vinegar and Dish Soap
Method 2: Use a Lit Candle to Capture Pesky Gnats
Method 3: Create a Gnat Trap with Rotten Fruit and Plastic Wrap
Method 4: Make a Trap Using Letter Paper and a Jar
Method 5: Use an Almost-Empty Bottle of Beer or Wine
Method 6: Make a Homemade Gnat Spray with Household Ingredients
Method 7: Get Rid of Gnats Around the Sink with Diluted Bleach
Method 8: Use an Insect Fogger to Kill Gnats Outdoors
Method 9: Clean to Get Rid of the Gnats at the Source
Method 10: Use Flypaper to Catch Gnats

One of the most used gnat traps is a simple mixture of apple cider vinegar, dish soap, sugar, and water. The sugar and vinegar help attract gnats while the dish soap traps them.

Add two tablespoons of vinegar to a half cup of warm water. Stir in a tablespoon of sugar and at least six drops of dish soap.

Pour the mixture into a bowl and place it near the problem area. Empty the bowl and refill it each morning until the gnats are gone. This is a simple and effective solution that only requires ingredients that you may already have around the house.

Method 2: Use a Lit Candle to Capture Pesky Gnats

If you want to avoid sticky mixtures, try using a candle to capture the gnats in your kitchen. For this method, you will need a tall candle, a candlestick, a shallow pan, and some water.

The gnats should be attracted to the flame from the candle as it is the only light source in the room. Some of the gnats may hit the flame and die while others simply fall into the water below. This is an easy method to try, but it requires you to monitor the flame.

Rotten fruit is one of the leading causes of gnat infestations. It can also be used to help trap the insects. This method requires rotten fruit such as an old banana, a small bowl, plastic wrap, and a rubber band or tape.

Place the rotten fruit in the bowl and cover with plastic wrap. Use a rubber band or tape to secure the wrap and then poke several holes in it.

The flies can easily make their way into the bowl to reach the fruit but should struggle to find their way out. The one drawback is the need to leave rotten fruit in the room.

Method 4: Make a Trap Using Letter Paper and a Jar

Place a chunk of rotten fruit in a jar and add a few tablespoons of vinegar. Roll the letter paper into a cone so that the narrow end has an opening about the size of a pea. You may also need to use a small piece of tape to keep the cone from unraveling. Insert the cone into the jar.

As with the previous trap, the gnats can easily fly through the cone to reach the rotten fruit but struggle to make their way out. However, this method also involves the use of rotten fruit, which may not suit everyone.

Method 5: Use an Almost-Empty Bottle of Beer or Wine

Forgetting to rinse out a beer bottle may attract gnats and can also help catch them. You can also use an old wine bottle for this trick.

Leave out an open bottle containing a small amount of beer or wine. The stale alcohol attracts the pests, and the skinny neck of the bottle keeps them from coming out.

While this method is often effective, it involves the use of alcohol. If you have small children in the house, you may not want to leave a bottle with a small amount of alcohol in the kitchen.

If you want to avoid using rotten fruit or alcohol, make a homemade gnat spray. This method requires a spray bottle, a half-cup of isopropyl alcohol, a half-cup of water, and one teaspoon of dish soap.

Combine the ingredients in the spray bottle and shake. Spray the solution on any area where gnats are present, such as the counters or trash.

The dish soap and water should stop gnats in their tracks while the isopropyl alcohol kills them. After spraying, you can wipe up the dead gnats with a paper towel. You can also leave the solution in place to attract and kill more gnats throughout the day.

Method 7: Get Rid of Gnats Around the Sink with Diluted Bleach

If gnats swarm around your kitchen or bathroom sink, food debris inside the pipes may be attracting the pests. You can try to get rid of them by pouring diluted bleach down the drain. The bleach should eliminate any odors that can bring more gnats.

Combine a half-cup of bleach with one gallon of water and pour down the drain. You should also wear a mask and safety gloves to avoid inhaling the fumes and exposure to the bleach.

Keep in mind that this method only works with gnats that circle the drain. Nearby gnats can continue to fly around.

Method 8: Use an Insect Fogger to Kill Gnats Outdoors

Sometimes gnats pose a problem outdoors, such as near your grill or patio. Unfortunately, homemade traps may not get rid of a large outdoor swarm. To enjoy grilling without gnats, spray an insect fogger earlier in the day.

Insect foggers include chemicals that instantly kill almost all flying insects, including gnats and fruit flies. However, the use of chemicals also requires extra precautions.

Avoid using foggers around pets or children. You should also wear a mask and gloves. If using an insect fogger near your outdoor cooking gear, wipe down all food preparation surfaces and grill grates before cooking.

Method 9: Clean to Get Rid of the Gnats at the Source

The best remedy often requires you to tackle the problem at the source. Eliminate the issues that are attracting gnats in the first place by thoroughly cleaning the affected area.

As gnats tend to appear in kitchens, avoid leaving fruit in baskets. You should also clean out the pantry, empty the trash, and wipe down all surfaces with a disinfectant. If your trash can is old, consider replacing it to eliminate any lingering odors.

These steps should solve the gnat problem, as gnats have an average lifespan of about two weeks. Eliminating their food sources should cause them to die out. You can also use one of the other methods to trap any remaining gnats.

Method 10: Use Flypaper to Catch Gnats

If the previous methods fail, try using flypaper to trap gnats. Flypaper has a sticky exterior to catch all types of flying insects. Some flypaper also includes specific scents to help attract the pests.

The main benefit of using flypaper is convenience. You secure the strips of paper to the ceiling or position them around problem areas such as the kitchen counter or trash. After a day or two, you simply throw away the flypaper. If the problem continues, you add another strip.

While fly paper can be effective, it is also unattractive. You may not enjoy looking at a strip of sticky paper covered in small gnats when preparing a meal.

Scroll back to top Hausette